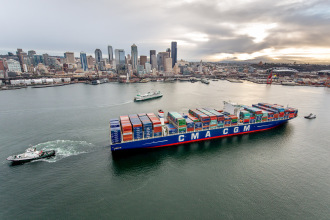 Today, our maritime industry has never been stronger – or more important to our region. Around here, maritime matters.

Washington State’s Maritime industry is rooted in the State’s rich history of timber production, its location as a trade hub, and its proximity to some of the world’s most productive fisheries. And we’ve always been the primary gateway to Alaska and Asia.

Washington is also the most trade dependent state in the United States.  Today, four in ten jobs in Washington are tied to international trade, according to the Port of Seattle.

And the maritime industry is thriving!

The growth of the industry is not just in shipping. You can see the strength of the industry at our shipyards, cruise ship terminals, Fishermen’s Terminal, Shilshole Bay Marina, ferry terminals and maritime businesses throughout Washington.

Click here to check out all of the recent economic impact studies of our maritime industry.

Steamship Portland arrives with a "ton of gold,"starting the first Seattle boom as miners by the thousands began their northward journeys.

Washington State Legislature enacts a law allowing the establishment of a port district and King County voters to approve creation of the Port of Seattle on September 5th.

The Port of Seattle’s Fishermen’s Terminal is dedicated the North Pacific Fishing Fleet makes it their home port.

Plants, such as Todd Shipyards and Skinner & Eddy Corporation, are busy with wartime  contracts for the Emergency Fleet Corporation. 30,000 men find work at eight shipyards over the next few years.

The Port of Seattle innovates with cold storage facilities never before seen. The Spokane St. Terminal is used for freezing, handling and storing fresh-caught fish from Alaska as well as keeping Washington apples, pears, berries, eggs, butter, and cheese refrigerated until they are exported or sent to local markets.

Lumber is the top export; the annual cut is over five billion feet. Half of Washington State residents are employed in lumber or allied trades.

Trade to the Orient now accounts for 50 percent of the Port’s foreign commerce.

Port of Seattle is granted authorization for Foreign Trade Zone No. 5 (FTZ), one of the oldest in the nation.

The Port of Seattle’s Shilshole Bay Marina is formally dedicated, marking the opening of
the area’s finest recreational moorage facility with room for 1500 vessels.

Grain exports get a new home with the opening of the $15 million Pier 86 Grain Facility.

An all-time high of one million containers moves through the Port of Seattle.

The Ports of Seattle and Tacoma announce Northwest Seaport Alliance.

Centennial of the Ballard Locks.